Christine – Part of the family 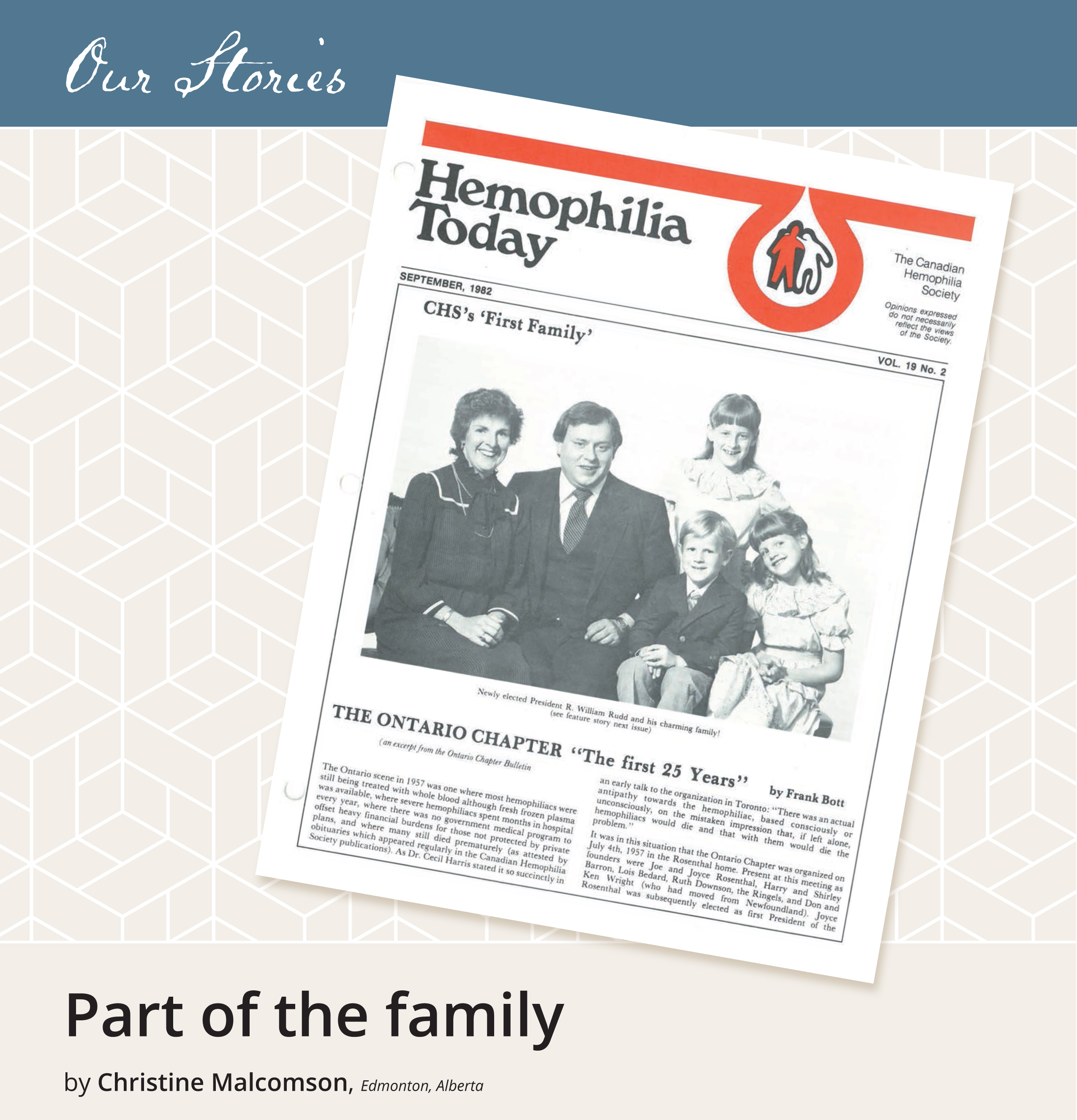 You know, it’s funny, lately at CHS events, introductions usually include a statement like: “Tell us how long you’ve been involved with the CHS.” As the conversation makes its way around the room, a variety of stories are told: “I found out a year ago …” “Our son was born five years ago …” And then it comes to me … My story begins 45 years ago …

I was born in 1974, into a family with an already long history of participation and advocacy in the Canadian Hemophilia Society. I am proud of my family’s legacy within the CHS. My grandparents, Dick and Janet Rudd, started the British Columbia Chapter in 1959-60; my father, Bill Rudd, served as CHS president from 1982-84; and my cousin, Rick Waines, continues to be a powerhouse advocate. My aunt, mom and sister have all been involved at various times through the years as well. The CHS is part of my family.

My childhood memories of the CHS, in typical adolescent fashion, involve mostly fun times, such as when my sister and I used my dad’s IV pole as a jungle gym. We would also anticipate the boxes of giant fundraising colouring books that showed up near Christmas. Of course, this usually devolved into quarrelling with my brother and sister over who got to colour what page and heaven forbid someone wanted to colour the same page or the picture on the back.

Other memories include our family trip to the AGM in Saskatoon in 1982, the year my father became CHS president and the year our basement became goodie bag stuffing central for a meeting that was happening in Vancouver. Later, I would look after the kids attending the BC Chapter AGM and education day at the Mary Pack Arthritis Centre in Vancouver. We would colour, play games, swim in the therapy pools, and then sneak back upstairs to see if the cookies had been put out for lunch and hope that Lois didn’t catch us trying to sneak one.

As my generation progressed into the 1990s, ties to the community were lost as people passed away. I wasn’t at an age when thinking about having children was high on my list of priorities and carrier/women’s issues were not yet a focus. After my father passed in 1991, my priorities became school and my own medical battle with rheumatoid arthritis.

As I became older, I learned more about what being a carrier meant and realized that being involved with the CHS would have a positive impact on my future. I participated in a few events locally (education sessions and the 2006 Hemophilia World Congress in Vancouver) but, not having hemophilia myself, felt I was limited in what I could do.

In 2009, my husband and I were living in another country when our first son was born, and then diagnosed with hemophilia. During our education session at the HTC we were handed a sheet of paper listing all the factor replacement options and told to “choose one.” I was terrified of doing something wrong for our child but was able to call on my hemo family to guide us through. Everyone I contacted helped us out. From factor and insurance questions to just reassuring us that all was good. 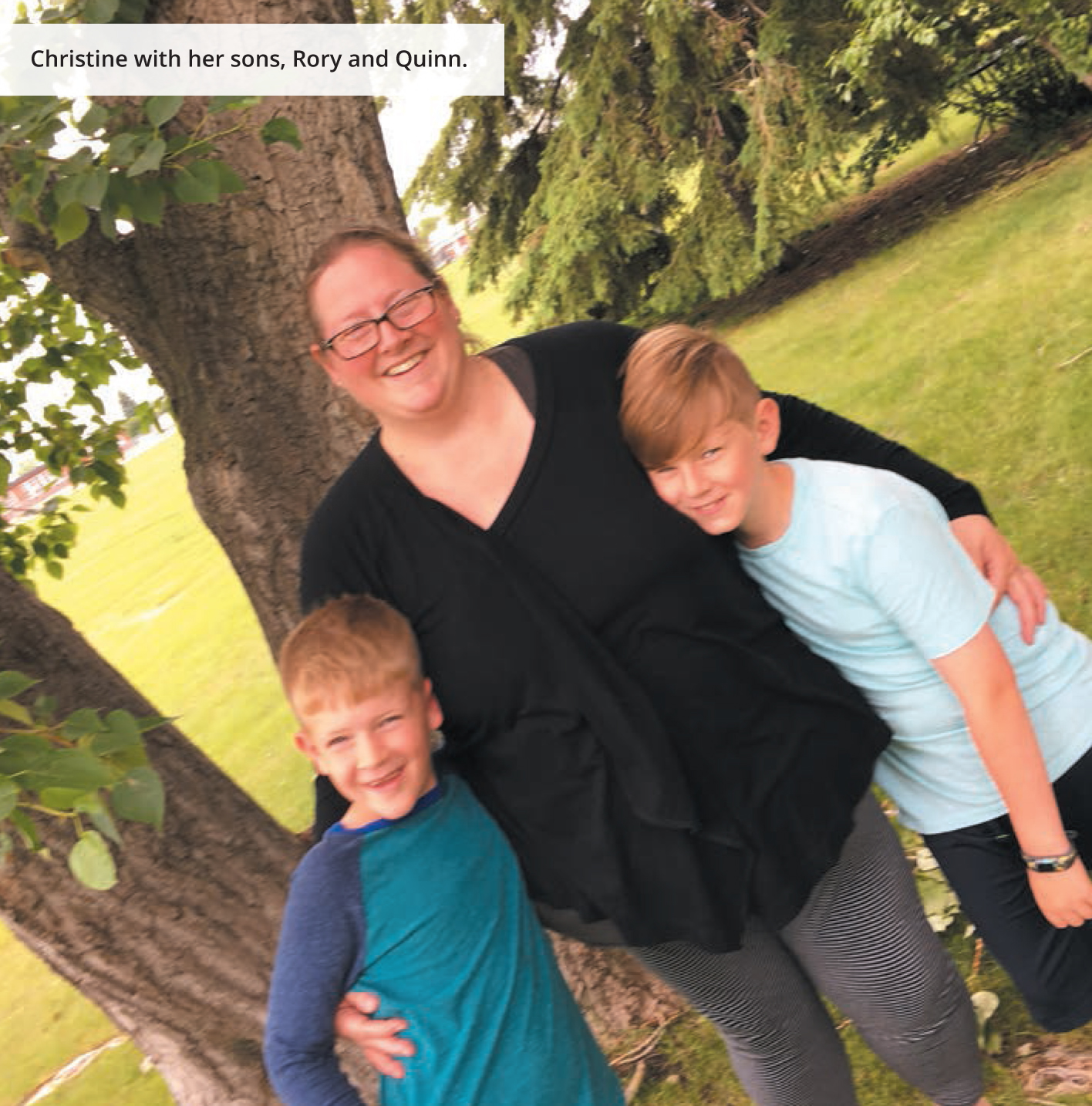 We moved back to BC with two severe hemophilia A boys under three. We had relationships already in place that helped ease the transition. Some of those relationships were rekindled from 15 to 20 years before. We became involved in the community, including a few trips to Rendez-vous, and I spent a couple of years on the BC Chapter Board of Directors.

Our recent move to Alberta has opened even more opportunities. Being involved in the CHS these days means camp for the boys where they gain some much-needed independence and friendships, camp for the family, education sessions, and so many new friendships.

The CHS is family to me. Though we may not have spoken in years, I can walk into a room and have a conversation with someone as though we’ve known each other forever. People who know my biological family welcome me with open arms.

I hope that as my boys grow, they will get involved and serve the community that is helping to shape their lives. That they have the opportunity to continue the work started by their great-grandparents.

About the Author: Rachel Leslie