Commemoration of the Tainted Blood Tragedy

It has often been said that the lessons learned in the tainted blood tragedy must not be forgotten and that the pain and suffering experienced by so many must not be in vain. The Canadian Hemophilia Society (CHS) intends to ensure that this does not happen by holding a National Commemoration of the Tainted Blood Tragedy that will salute those now silent victims.

When AIDS appeared in the early 1980s and soon became an epidemic, the entire Canadian blood supply system was affected. Over the next years, HIV had a huge impact on the hemophilia and blood-transfused communities. With the advent of HIV testing in 1985, it was recognized that a very high percentage of those with severe hemophilia and hundreds of others receiving blood or blood products had been infected.

More than 1,100 transfused Canadians were infected by HIV, of whom 700 had hemophilia and other bleeding disorders, and 400 were transfusion recipients for other reasons (trauma, surgery, childbirth, cancer…). Between 700 and 800 of these people have passed away.

A much larger number of people – up to 20,000 – were infected with the hepatitis C virus (HCV) through blood and blood products before testing was introduced in 1990. The number of people who have died from hepatitis C related liver disease caused by tainted blood is not known but could be in the thousands, and continues to rise.

The tainted blood tragedy is one of the worst public health disasters that Canada has ever faced.

Between October 1993 and November 1997, when the Final Report of the Commission of Inquiry on the Blood System in Canada was published, the Krever Commission brought this tainted blood tragedy into the public eye. 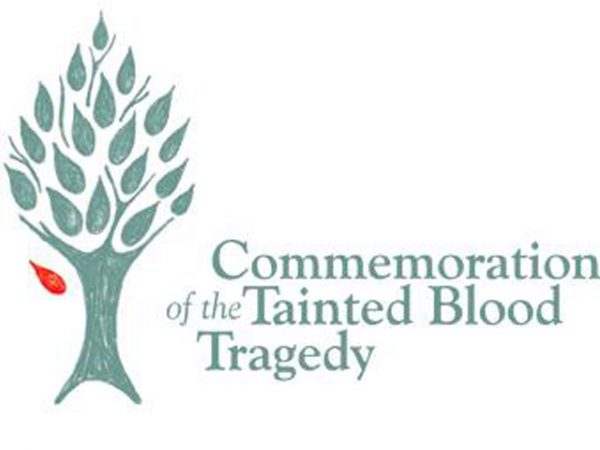 The tree is an important symbol in nearly every culture. With its branches reaching into the sky, and roots deep into the earth, a tree symbolizes life.

For families who have lost a loved one, it can be a daily reminder that the person is not forgotten, that his/her memory lives on.

A tree lives through the four seasons, and is constantly changing and growing. More and more, as the environment becomes a priority, trees are coming to symbolize health.

The Saskatchewan Chapter held a commemorative event in the afternoon of November 18 at T.C.U. Place in  Saskatoon which was followed by a

On October 27, 2014, the Quebec Chapter published the following bulletin to commemorate the Tainted Blood Tragedy and which can be viewed here. Dear

These are the November 26-28, 2014 displays at Canadian Blood Services, both in Regina and Saskatoon, to commemorate the the Tainted Blodd Tragedy