This year’s Member Engagement campaign features the stories of our COMMUNITY,
and why your support is critical in ensuring our legacies
in ADVOCACY and YOUTH LEADERSHIP continue.

Donate here
Before being granted access to emicizumab, Jace, at only seven years old, asked his mother if he was going to die …
Today he is able to join school sports teams like handball, running, and basketball. He can go outside for recess and participate in gym class. Jace’s family has had no disruptions to their family life from hemophilia’s unpredictability since beginning emicizumab.
Thanks to the efforts of Leanne, the CHS, the treatment centre in Edmonton, and the many folks across Canada who took the time to write to ministers of Health across Canada, emicizumab is now approved and available in Canada for severe hemophilia A patients with inhibitors. Jace’s outcome would have been very different without these advancements in care and our bleeding disorder community.
We are very fortunate in Canada to have access to some of the best care available for people with inherited bleeding disorders. Access to new therapies like emicizumab and gene therapy must not be taken for granted.
Advocacy matters: https://bit.ly/3n6zFA1
#TogetherWeAretheCHS⁠ #community 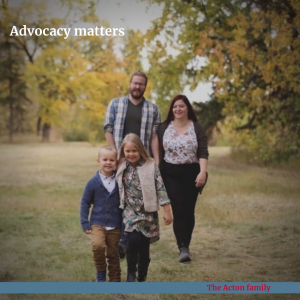 Along with severe hemophilia A, my son Vaughn suffers from autism spectrum disorder and severe global developmental delay. From the time Vaughn was 10 months old, he was receiving recombinant FVIII product through a port-a-cath. By two years old, he was on infusions every second day. Despite being on the highest recommended frequency of infusions, he experienced frequent joint bleeds in his right knee, along with extensive bruising, frequent alarming goose eggs on his head, a number of mouth bleeds, and two injuries to his port-a- cath. I would guess that he had roughly 100 ER visits in the first 4 years of his life, despite being on home treatments.

In the 6 months since starting on Hemlibra, he has had zero bleeds and has only once required factor for a mild concussion. We have had only 1 ER visit, require very minimal support from our HTC team, and are able to completely manage the injections on our own from home. However, the most substantial improvements we’ve seen have been to his mental health and development.

Since the initial period on Hemlibra, Vaughn has become active, learning to run, jump, and climb like other 4-year-olds. He has become extremely social and his anxiety is limited to only a brief period around his treatments and is much more easily de-escalated. He tells us that he is not in pain anymore, and he enjoys playing with his friends and his sister. His time is no longer spent crying and fighting, he is instead taking up new hobbies and learning new things.

Last year, we would spend every other day with a 2- to 4-hour anxiety attack, and every night with a sleepless child struggling with chronic pain. We now spend our days just as any other family does.