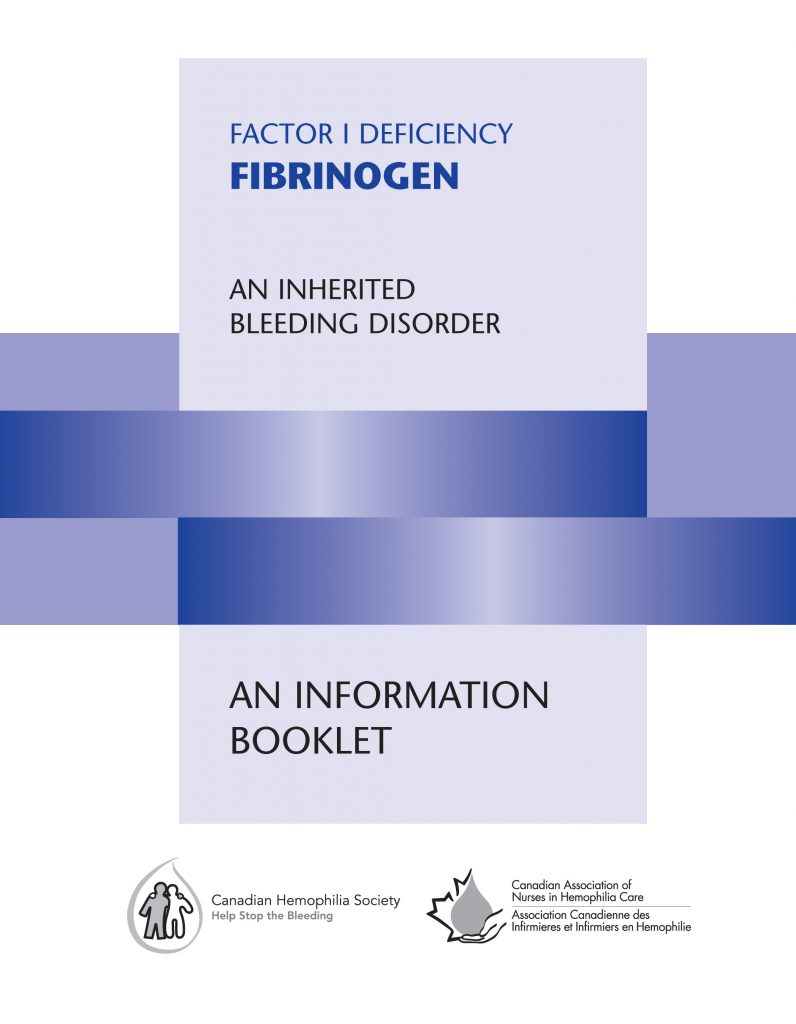 Factor I (or fibrinogen) deficiency is a very rare inherited disorder with complications that vary with the severity of the disorder. It is not well known, even among health professionals. People affected by this disorder and those close to them have very little written information about it.  There are three kinds of fibrinogen deficiency: afibrinogenemia, hypofibrinogenemia, and dysfibrinogenemia.  This disorder affects men and women in equal numbers. In some cases it can also cause serious bleeding or thrombosis.  This booklet seeks to provide information for people trying to cope with this health problem. It explains the causes of the disorder and currently available treatments.

Factor I deficiency was described for the first time in 1920 by Fritz Rabe and Eugene Salomon. These two German physicians are credited with discovering the disorder. They studied the case of a 9-year-old boy who presented unexplained bleeding problems from birth. Blood tests finally demonstrated the absence of fibrinogen in the child’s blood. His parents were first cousins, but they showed no bleeding problems. The two researchers established that it was an inherited disorder often found in subjects whose parents were blood relatives. Since then, knowledge about the condition has advanced considerably.

Fibrinogen, also called Factor I, is a blood plasma protein produced by the liver that plays an important role in blood coagulation. Blood coagulation is a process in which several components of the blood form a clot. When blood escapes from a rupture in a blood vessel, coagulation is triggered. Several proteins, called coagulation factors, go into action to produce thrombin. The thrombin then converts fibrinogen to fibrin. Fibrin produced from fibrinogen is the main protein in a blood clot. It surrounds the cells in the blood and plasma and helps form the clot. The resulting clot, which is stabilized by Factor XIII, remains intact from 10 to 14 days, the time required for healing to take place.

When there is a problem with fibrinogen, i.e., either it is missing or it does not function properly, the clot has difficulty forming. This can result in hemorrhaging or thrombosis.

The normal volume of fibrinogen in the blood is from 2 to 4 g/l (grams/litre).

The amount of fibrinogen in blood can be measured from a blood sample.

There are three types of deficiency:

Afibrinogenemia: (absence of fibrinogen)
In this type of factor I deficiency, there is a complete absence of fibrinogen. The fibrinogen level is <0.2 g/l of plasma. about 5 people out of 10 million are affected by it. of the three types, this one causes the most serious bleeding.

Hypofibrogenemia: (lower than normal level)
In this anomaly, fibrinogen is present, but at a lower level than normal, between 0.2 g/l and 0.8 g/l. This anomaly is less frequent than afibrinogenemia. Bleeding problems may be mild, moderate or severe.

Dysfibrinogenemia: (malfunctioning)
In dysfibrinogenemia, the fibrinogen level is normal, which means between 2 and 4 g/l, but the fibrinogen does not function properly. About 1 person in 1 million is affected by this condition. More than 100 different types of dysfibrinogenemia have been reported. Those affected rarely suffer from hemorrhaging problems. They may even present the opposite condition: thrombosis (blood coagulates in the blood stream).

Fibrinogen deficiency is a very rare inherited bleeding disorder. It is transmitted from parent to child at conception. The disorder is caused by an abnormal gene. It affects both men and women, as well as people of all races and ethnic origins.

Every cell of the body contains chromosomes. A chromosome is a long chain of a substance called DNA. DNA is organized in 30,000 units: these are called genes. The genes determine physical characteristics, such as eye colour. In the case of fibrinogen deficiency, one of the genes involved is defective.

The defective gene in fibrinogen deficiency is located on a chromosome that is not responsible for the child’s sex (autosomal). As a result, both girls and boys can be affected equally.

Afibrinogenemia (absence of fibrinogen)
This is a recessive disorder, which means that both parents must be carriers. In order for a person to inherit fibrinogen deficiency, he must receive two defective genes, one from the mother and the other from the father. A carrier is a person who has only one of the two defective genes, but is not affected by the disorder: the second gene enables just enough fibrinogen to be made for good coagulation. The fibrinogen level will be lower than normal, but there will be no symptoms of the disorder.

Hypofibrinogenemia and dysfibrinogenemia
These are inherited disorders that can be either dominant or recessive.

Dominant means that a single parent can transmit the disorder if he or she is a carrier.

Recessive means that both parents must be carriers of the disorder in order to transmit it.

Afibrinogenemia (absence of fibrinogen)
In congenital afibrinogenemia (fibrinogen level <0.2 g/l), bleeding can vary, from slight to severe. many patients have very long intervals between bleeding episodes. a diagnosis of afibrinogenemia is generally made postnatally, usually because of bleeding from the umbilical cord and/or a hemorrhage following circumcision.

Other types of bleeding have been described:

About 20% of those suffering from afibrinogenemia present hemarthroses (bleeding in the joints). Because of this particular feature, the disorder may be confused with hemophilia A or B.

The higher the fibrinogen level, the less bleeding.

The lower the fibrinogen level, the more bleeding.

How to recognize bleeding

It is strongly recommended that people who suffer from afibrinogenemia or severe hypofibrinogenemia learn to recognize the signs and symptoms of bleeding that could threaten their lives or the integrity of a limb, so they can react adequately and in a reasonable time.

The information below describes the main types of bleeding that may occur in someone with a coagulation disorder.

Bleeding that affects the head, neck, thorax (chest) or abdomen can be life-threatening and may require immediate medical attention. Bear in mind that this kind of bleeding can occur either following an injury or spontaneously (without injury).

Head
The brain, which is protected by the skull, controls all bodily functions that are essential to life. Bleeding in the brain is very serious.

Neck
The tissue of the nose, mouth and throat are highly vascularized, which means that they contain many veins and arteries. The slightest lesion or infection can cause an accumulation of blood in this tissue. When the tissue swells with blood, it compresses the respiratory tract, making breathing difficult or even blocking it completely.

Thorax (chest) – Infrequent
The rib cage (thorax) contains the lungs and heart, as well as large blood vessels. If bleeding occurs in the lungs, the alveoli, which normally contain air, fill with blood, and breathing becomes difficult.

Abdomen (stomach)
The abdomen contains the stomach, spleen, liver and intestines, as well as other organs. An injury in this area can result in massive hemorrhaging of an organ or major blood vessel. If the hemorrhage is not treated, it can be fatal.

If one of these symptoms occurs, consult a physician immediately.

There are other kinds of bleeding that are not necessarily life-threatening, but for which treatment is necessary. These are described below.

Soft tissue bleeding
The signs and symptoms of bleeding of the soft tissue are as follows:

Fibrinogen concentrate can be administered by drip:

It is impossible to completely eliminate the risk of transmitting infections that are currently unknown.

There are other options that can be considered for treatment:

However, their use is not recommended much nowadays for various reasons, such as:

Anticoagulants are sometimes used to reduce the risk of thrombosis among patients with dysfibrinogenemia.

Fibrinogen deficiency affects both men and women. However the impact is greater for women because of menstruation and conception. Amount of bleeding may vary depending on the type of deficiency.

Menstruation
In afibrinogenemia, menstrual bleeding can be very abundant (menorrhagia) or entirely normal. When bleeding is abundant, various treatments, such as oral contraceptives and/or Cyklokapron may be useful. Cyklokapron is an antifibrinolytic agent that helps stabilize the clot and better control bleeding. It is rare to have to use fibrinogen during menstruation.

Pregnancy
The majority of pregnancies in women presenting afibrinogenemia end in miscarriage between the 5th and 8th week of pregnancy.

Childbirth
Detachment of the placenta is frequent at the start of labour. To prevent placental detachment it is necessary to keep the fibrinogen level between 1.5 g/l and 2g/l, if possible.

Menstrual problems and problems of pregnancy with hypofibrinogenemia are much like those observed in afibrinogenemia. They can be more or less serious, depending on the level of fibrinogen in blood.

The higher the fibrinogen level, the less abundant the menstrual bleeding and the fewer miscarriages.

The lower the fibrinogen level, the more likely menstrual bleeding will be abundant and the higher the rate of miscarriages. The treatment is the same as for afibrinogenemia.

Menstrual problems and problems of pregnancy vary depending on the type of dysfibrinogenemia.

Treatment must be tailored to the situation. Many patients may give birth without bleeding, and fibrinogen concentrate is often not necessary.

Vaccination
The Canadian Pediatrics Society has published several documents promoting the Canadian vaccination program. Children must receive their first vaccinations at a young age. However, it is important to take precautions in order to avoid bleeding at the injection site. The nurse at the hemophilia treatment centre will be able to tell you what precautions to take.

Children with fibrinogen deficiency must receive their vaccines on a schedule set by their pediatrician or family physician. It is also recommended that anyone receiving human source coagulation factor concentrate be vaccinated against hepatitis A and B.

The hepatitis A virus is present in the stools of infected people. It can be transmitted from one person to another by:

In the past, hepatitis B could be transmitted by blood factor concentrates. Nowadays, however, the concentrates pose no risk. This having been said, a person suffering from a coagulation disorder is more likely to need blood transfusions and these may transmit hepatitis B, albeit very rarely. That is why vaccination is recommended.

Hepatitis B is a disorder caused by a virus that attacks the liver. The liver helps to digest food and clean the blood. Some people infected by hepatitis B present no symptoms, but they can nevertheless transmit the disease to someone else. In other cases, hepatitis B makes people very sick. It can cause serious damage to the liver and an infection that lasts a very long time. There is no completely effective treatment for hepatitis B.

Hepatitis B is transmitted by contact with bodily fluids, including:

As the name suggests, a comprehensive care team provides most of the medical services required by a child or adult with an inherited bleeding disorder, such as fibrinogen deficiency. It is important that medical monitoring be provided for affected individuals by a centre specializing in the treatment of coagulation disorder, such as a hemophilia treatment centre. This team is composed of several professionals, including:

The team works closely with other specialists—a surgeon, an orthopedist, a rheumatologist, a dentist, a geneticist and a psychiatrist, among others. The purpose of this multidisciplinary team is to ensure the well-being of the patient and, in the case of a child, the parents as well.