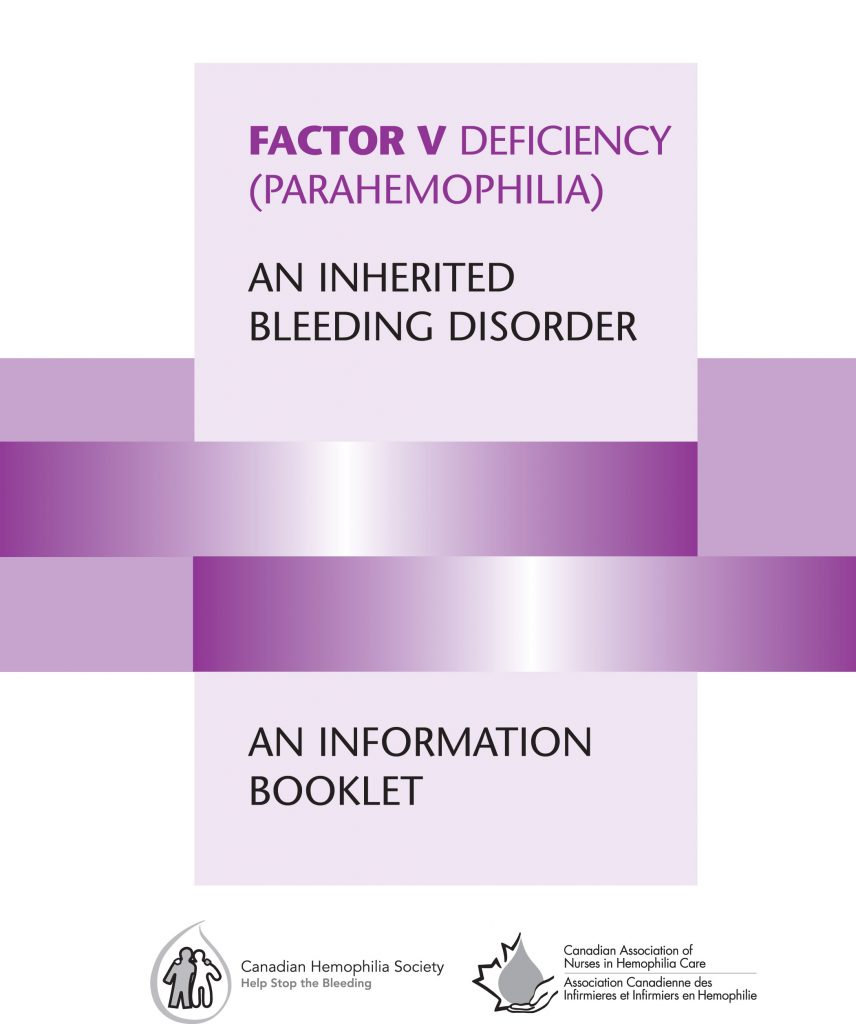 Factor V deficiency, also called parahemophilia or Owren’s disease, is a very rare coagulation disorder. About one person in a million may be affected by this deficiency. Only 150 cases have been identified worldwide to date. It affects both men and women and in some cases, can cause serious bleeding. Factor V deficiency can also be combined with factor VIII deficiency. It is necessary to distinguish between these two deficiencies in order to be able to administer appropriate treatment.

There is very little written information about this disorder. The purpose of this booklet is to describe the disorder and its treatment in order to help those affected by it deal with this health problem. The booklet explains the disorder and currently available treatments.

This booklet will not answer all your questions. The best source of information is still the comprehensive care team at the hemophilia treatment centre. However, it can provide a helpful reference for those affected, as well as their families.

Factor V deficiency is a rare inherited bleeding disorder. It was first identified in 1943 in Norway by Owren.

Factor V is a blood protein that plays a role in the coagulation cascade, the chain reaction that is triggered when a blood vessel is damaged. Blood is carried throughout the body in a network of blood vessels.When we are injured, the blood vessels may break at the surface, as in the case of a cut. Or they can break deep inside the body, causing a bruise or internal hemorrhage. Clotting, or coagulation, is a complex process that makes it possible to stop injured blood vessels from bleeding. As soon as a blood vessel wall breaks, the components responsible for coagulation come together to form a plug at the break. Coagulation factors are required to hold the plug (or homeostatic plug) in place and form the permanent clot.

There are several steps involved in forming a clot:

Step 1 The blood vessel is damaged.

Step 2 The blood vessels contract to restrict the blood flow to the damaged area.

These proteins (factors I, II, V, VIII, IX, X, XI, XII and XIII, as well as von Willebrand factor) are triggered in a kind of domino effect, a chain reaction that is called the coagulation cascade.

Factor V is a protein involved in the complex cascade process that takes place when a blood vessel is damaged.

How Factor V deficiency is inherited

Factor V deficiency is an inherited bleeding disorder. This means that it is passed on from parent to child at the time of conception. It is an autosomal recessive disorder, which means that each parent must pass on a defective gene in order for the child to manifest the disorder.When only one of the two parents is a carrier of the gene responsible for the Factor V deficiency and it is passed on to a child, the child will not be affected.

If a person inherits the defective gene from only one of the parents, he/she will be a carrier. His/her factor V level will be lower than normal. Symptoms of the disease may be absent or only slightly present.

Each cell of the body contains structures called chromosomes. A chromosome is a long chain of chemicals known as DNA. This DNA is arranged into about 30,000 units called genes. These genes determine such things as the colour of a person’s eyes. In the case of factor V deficiency, one of these genes has a defect. The defective gene in factor V deficiency is on a chromosome that does not decide the sex of the child. This means that factor V deficiency can affect females as well as males.

The five illustrations below show how FV deficiency can be passed on for each pregnancy.

Figure 6 shows what can happen when one of the parents has the disorder and the other is normal. All their children will be carriers of FV deficiency.

Incidence
Factor V deficiency is an extremely rare disorder. It is estimated that one person in a million has factor V deficiency. Only one hundred and fifty cases have been identified worldwide to date.

It is also important to check the blood level of factor VIII. This is because another inherited bleeding disorder combines factor V and factor VIII deficiencies. The two disorders must be distinguished before appropriate treatment can be administered.

By comparison with some other coagulation factor deficiencies, the bleeding that accompanies factor V deficiency is generally harmless. Factor levels are generally between 5% and 30%. These levels are not generally associated with a hemorrhagic tendency. A factor V blood level between 10% and 20% of normal is enough to prevent bleeding, even after surgery.

The most common symptoms of factor V deficiency are:

The severity of the symptoms may vary within a single family.

It is very important to mention this deficiency to a dentist, physician, and/or other specialists in order to prevent a delay or cancellation of surgery.

Treatments are needed only in major bleeding or as part of preoperation preparation.

Fresh frozen plasma is the usual treatment for factor V deficiency. DDAVP and antifibrinolytic agents (agents that prevent clots from dissolving) will be used sometimes, depending on the circumstances.

Most nosebleeds are controlled with local measures and antifibrinolytics.

Recommendation for the patient with factor V deficiency

It is important to wear a MedicAlert bracelet chain engraved with the bleeding disorder you have at all times. Even if the person has never had significant bleeding, this will inform medical professionals of the coagulation disorder. As a result, any questions about coagulation that may arise as a result of abnormal blood tests will be avoided, and the person can be cared for more easily.

As the name suggests, a hemophilia comprehensive care team provides most of the medical services required by a child or adult with an inherited bleeding disorder.

The team is composed of several professionals, including:

The team works closely with specialists – a surgeon, an orthopedist, a rheumatologist, a dentist, a geneticist and a psychiatrist, among others. The purpose of this multidisciplinary team is to ensure the well being of the patient and, in the case of a child, the parents as well.