Vic – The courage to tell our story 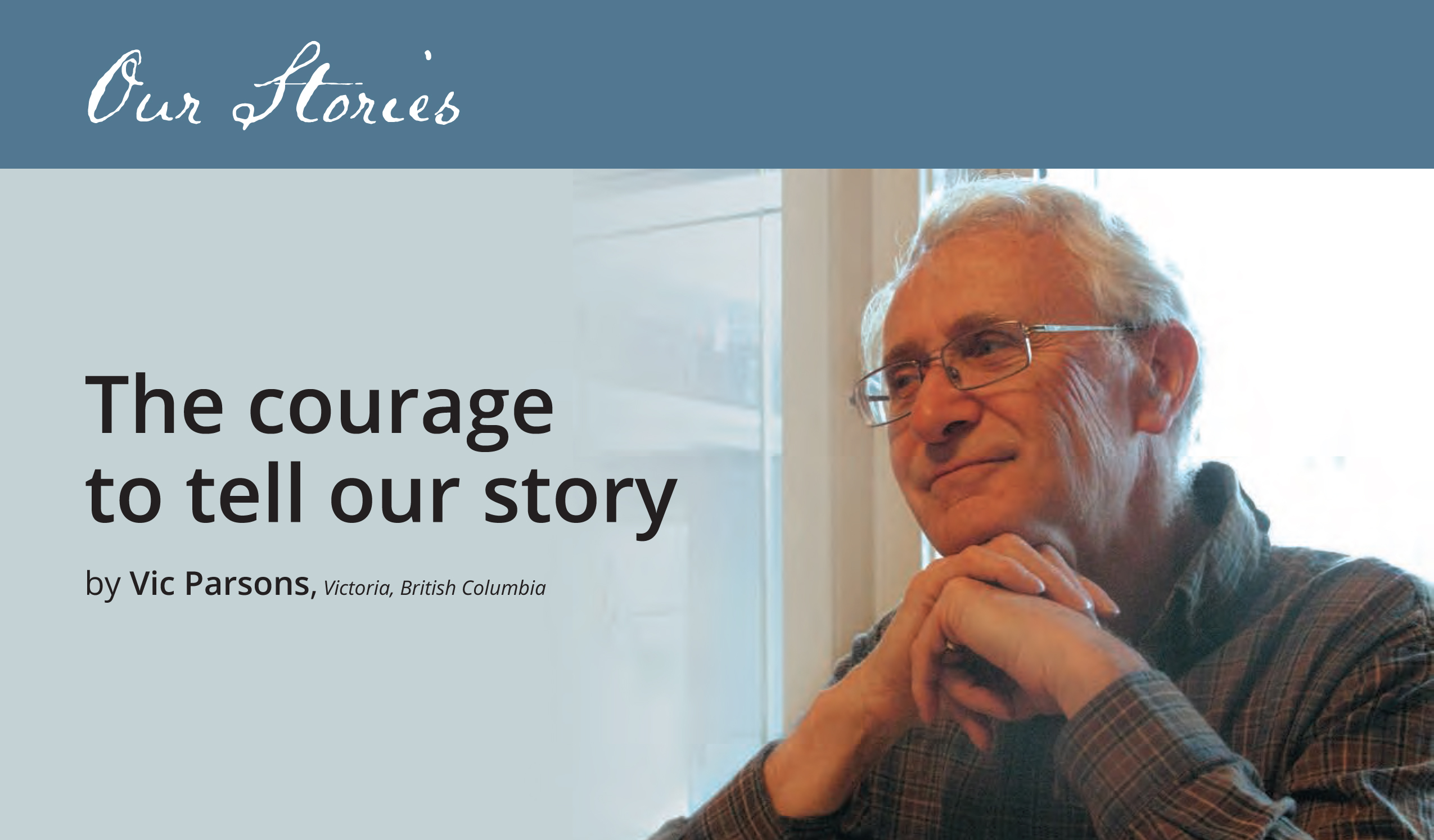 Last August, my nephew Sam died after a courageous three-decade-long battle against hepatitis C. He was awaiting a liver transplant and the doctors were trying to make him strong enough to withstand surgery. Sam was only one of four hemophiliacs in our extended family. The closest to me is, naturally, my son David, who is a severe factor VIII hemophiliac in his mid-40s.

Treatments for hemophilia, HIV and HCV have changed drastically since the horrendous years of the mid-1980s to the early part of the 21st century but Sam’s death, even though he had other health issues, was a reminder that the legacies of the past are still with us.

I was involved with the Canadian Hemophilia Society for several years, mostly at the provincial and regional chapter level. In 1980-81, I was president of the British Columbia Chapter and sat on the national board. Later, when we moved to Ontario, I worked with the Ottawa regional board. My partner, Lorraine Calderwood-Parsons, whose father was a hemophiliac and died when she was very young, was involved for many years also.

In the early 1990s, when the true horror of the HIV/AIDS disaster became apparent, I started work on a book. We knew from 1986 that David had tested HIV positive but there were many unanswered questions – what potentially risky products had he used, when did he become infected, why was he not included in the group that first received heat-treated factor concentrates? The answers from doctors seemed contradictory and incomplete.

The project was difficult and emotional, hitting close to home. But with Lorraine’s encouragement and assistance from some members of the CHS, who forwarded me relevant documents, I was able to persevere. One of the things that gave me a push was seeing the movie Lorenzo’s Oil starring Susan Sarandon and Nick Nolte, based on a true story. I thought to myself, if they could go through that exhausting and determined process for the benefit of their son, how could I do any less? I still recommend that film as an inspirational lesson for people seeking better medical treatments.

My goal was not simply to tell the story from official documents but to reveal how members of the hemophilia and transfusion-infected community were personally affected. I remembered at a CHS meeting on compensation, David Page saying that what we needed in order to gain broad public support was someone who was willing to tell their story openly. That would take courage and a willingness to be exposed on the national stage.

Fortunately, I had a job at the time that took me to many parts of Canada. In my free time, I arranged appointments with people whom I learned had become HIV positive and whose health, or that of their relatives, was in decline. This was before the appointment of the Royal Commission of Inquiry on the Blood System in Canada led by Justice Horace Krever. So many people courageously stepped up to tell me their stories, both people with hemophilia and patients who had been infected through transfusions during surgery. I was, and am still, indebted to them for their willingness to talk.

Our David had had some experience of what it meant to tell others of his infection. Some friends dropped him. In one case he was sharing an apartment with others and he was told to leave. We too were secretive. If people asked us if David was one of those infected with HIV through blood products, we looked them in the eye and blatantly lied. We did not even tell David’s two sisters for several years.

Meanwhile, David had been on the early cocktail of drugs that were prescribed as having some beneficial impact against the virus. These made him nauseous, feeling worse than he did without them. His T-cell count had to fall to six before we were able to persuade him that it was essential that he take the drugs.

I wanted to tell the story of the fight for compensation from both senior levels of government. This would be not only a description of “our fight” but also a pattern for others seeking future justice, I believed.

As the book neared completion, it was time to find a publisher. I received several rejection letters, as every newbie author does. One in particular stood out for me: “There might be enough here for a magazine story, the publisher wrote, but certainly not enough for a book.” That shows you how much some publishers know!

A good fit was finally found. Malcolm Lester of Lester Publishing in Toronto believed in the importance of the story and the book, Bad Blood: The Tragedy of the Canadian Tainted Blood Scandal, came out early in 1995. The book got universally positive reviews in the Globe and Mail, Toronto Star, Montreal Gazette, Macleans, and many other media outlets. It was shortlisted for book awards, including the prestigious Gordon Montador Award for the Best Canadian Book on Social Issues.

One thing I included in the book was a chapter on the spread of hepatitis C. I had been struck by the comment of Étienne Saumure, a resident of Gatineau, Que., who had come to an Ottawa regional meeting and complained that he too had received bad blood but it was the “wrong disease” to be eligible for compensation. At the time, it was not apparent, at least to the public, that hepatitis C was in fact a much more widely spread infection than HIV. The impact was not as dramatic as HIV/AIDS but the long-term effects could lead, and have led, to many deaths.

After the Krever inquiry report came out in 1997, I was visited by the RCMP investigators looking into the possibility of criminal charges against the blood authorities for their actions – or perhaps more accurately, their lack of actions – in the 1980s. They came to my home, now in Victoria, and asked questions about the source material for the book and I turned over to them some relevant documents I had for their use.

As years passed, our family moved on to other things. Lorraine and I had a South African friend who invited us to his country in 2000 and I attended the 13th International AIDS Conference in Durban as a freelance reporter. We visited some hospitals and orphanages where people were dealing with the AIDS crisis there and Lorraine came up with an idea to raise funds for these institutions through the sale of little handmade dolls called African AIDS Angels. We have been back twice to work in an orphanage there with children who have either lost parents to AIDS or are infected themselves. This likely would not have happened without our family experiences.

In those intervening years, I watched from a far with sadness as some of those heroic figures I had interviewed for my book passed on: Ed Kubin, John Plater, James Kreppner, Mark Bulbrook and John Wilson, among them. I was astonished by the failure of the criminal charges against the Red Cross and government authorities and corporations that I felt had a role in the tragic story of bad blood. I was gratified that some compensation was arranged for those who suffered from the debacle, and thankful for the one-pill-a-day miracle drugs that control HIV and the new treatments that eradicate HCV.

Then much to my surprise, in 2015 I received a call from Robert Cooper asking for the right to option my book as a partial basis for a television miniseries he was working on. Rob is a hemophiliac who was infected with HCV through contaminated blood products and a highly successful producer in his field.

Naturally, I complied. Any effort to revive the cautionary tale of bad blood was worthwhile in my eyes. The result has been the production of the eight-part series Unspeakable that will air on CBC Television beginning in January 2019. Mark your calendars!

Rob encouraged me to put out a revised, updated version of my book and so I set to work. A publisher was found, Optimum Publishing International, and the new book is to come out this fall, titled Bad Blood: The Unspeakable Truth. It will include many updates and expand on the battle for justice for people infected with HCV.

I was struck by a press release put out in November 2017 by Graham Sher, head of Canadian Blood Services, that marked 20 years since the release of the final Krever inquiry report. “Sadly, an entire generation is largely unaware of the extent to which the (blood) system failed,” Sher wrote. Fewer than half of respondents in a poll “indicated some basic awareness of the Krever inquiry and its findings.”

This is why it is so important today to repeat the messages inherent in a television series like Unspeakable and why I felt the need to release a revised edition of my book.

Reflecting back, we are so grateful that our son has survived the HIV/AIDS and HCV catastrophes when so many others perished. Today, David has two children of his own, which we would never have thought possible even 10 years ago. And I think often of the words of Bob Pedersen, a former CHS president, who told me a quarter century ago, that we as a community need to celebrate our many heroes, living and dead.

About the Author: Rachel Leslie